A December 2016 Kaiser Family Foundation survey[1] showed that about two-thirds of Democrats, Republicans, and independents all say lowering the amount individuals pay for health care should be the top priority for President Donald Trump and Congress. Based on data from the US Centers for Medicare and Medicaid Services (CMS),[2] Americans will pay $4.2 trillion for the health system in 2020, rising to $6.9 trillion in 2029 (21.1% of GDP), totaling $55.7 trillion for 2020 – 2029. We desperately need to reduce the OVERALL cost of our health care system.

Table 1 shows the overall US health industry spending in 2009 and 2016 and the projected costs with Obamacare in place unaltered until 2029. Table 1 assumes the CMS projection that the overall economy will average 2.2% per year “real” gross domestic product (GDP) growth (equating to 4.4% per year “nominal” GDP growth) from 2017 to 2025.[2]  The 2029 cost estimate was extrapolated using the same growth rate. Whether the overall US GDP grows at all and by how much, CMS statisticians project that our health industry cost will grow by 5.8% per year on average until 2025.[2]

Employment in the US health industry

After consultation with statisticians at BLS and Bureau of Economic Analysis (BEA), I derived an estimate of 22.3 million full-time equivalent health industry workers in 2016 based on:

Due in large part to the flooding of 10,000 baby-boomers into Medicare per day over the next 16 years, the BLS expects health care worker employment to continue increasing at over three times the rate of overall employment growth until at least 2024 (2.10% per year versus 0.65% per year), [6] and health industry workers’ compensation growth to continue averaging 2.63%/year.[7]

Table 2 shows the projected increase in employment in health related jobs and in compensation of employees from 2004 to 2024, [6] with the same rate of growth extrapolated to 2029.

Table 2. Employment in the US—historical data and future projections[5-7]

The Grand Bargains strategy for targeting US health industry waste

Four major factors account for out of control national health spending in the US:

US health industry administration costs could be markedly cut by eliminating all current public and private insurance programs. Instead, as mentioned above, consider private, competing, self-regulating health care cooperatives. Private insurance companies would not be needed. However, about 10% of the health care workforce could consist of insurance professionals and other administrators for 2000 – 4000 such accountable care cooperatives.

Competing health care cooperatives will be positioned and incentivized to cut funding for unnecessary medical interventions, fraud, and overcharging. To cut waste in these areas, we need a five prong approach:

With medical insurance funding from the government frozen at the 2020 level until 2029, national health expenditures could still rise if either (1) people choose health cooperatives that on average increased premiums above the 2020 rate or (2) an act of Congress increased government funding for health care above the 2020 level. Individuals would regain control of their own health care choices, and policymakers would regain control of overall system costs.

Care of children is also seriously undervalued in the U.S. The average wage for paid child care workers is $8.78 per hour.[16] I have previously suggested paying childcare providers, including parents, to help low-income families meet living expenses and to recognize the health benefits and social worth of good child rearing.[17] It is also a way to stimulate the economy while counteracting wealth inequality.

By adding 20 million full-time equivalent home health aides and childcare providers to the remaining health care professionals, the transformation of the health industry by 2029 would include:

With this scenario, the health industry will net an additional 10 million jobs (≈80,000 new jobs per month) while expenditures will drop to about 15% of GDP by 2029 ($4980 billion (projected health industry costs) / $32,906 billion (projected GDP) = 0.151).  By reducing the proportion of administrators in the health industry from 31% status quo[18] to 10%, about 7 million of these 10 million projected health industry job losses would be redundant administrators. By 2029, there would be about 600,000 more health care providers than now but about 3 million less than the unsustainable status quo projection. Never the less, with this welcome major decrease in administrative drag on the system, health care providers would be much more effective in delivering compassionate care than in the current broken system. The benefits for health care providers will include dramatically less unnecessary paperwork, more autonomy, less burn out, and more satisfaction with providing excellent health care.

David K. Cundiff is an independent, evidence-based medicine researcher and health industry analyst. He formerly served as medical oncologist at the Harbor-UCLA Medical Center and at the LA County + USC Medical Center as hematologist, internist, and palliative care consultant. His recent book, Grand Bargains—Fixing Health Care and the Economy,[20] analysed the waste and dysfunction of the US health system and overall economy and proposed reforming the health system and the economy with a hybrid system of free-market capitalism comprising two-thirds of the economy and communitarian health and human services through member-owned cooperatives administering one-third of the economy. 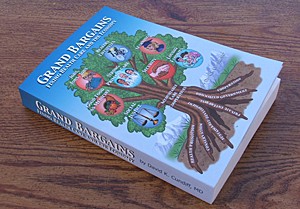